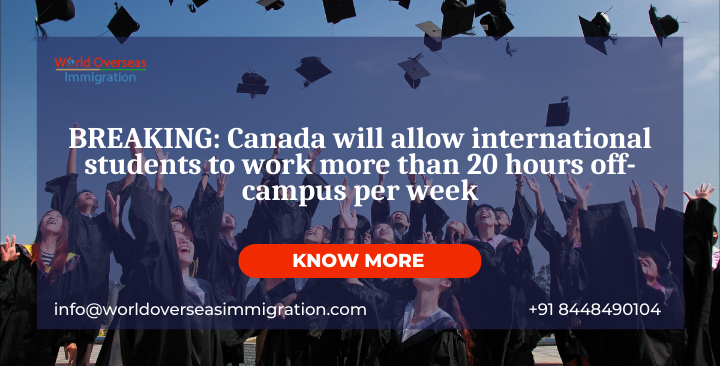 From November 15, 2022 to December 31, 2023, international students who are in Canada and have off-campus work authorization on their study permit will be allowed to work no more than 20 hours off-campus per week during class sessions .

This temporary measure will also be applicable to foreign nationals who have already submitted study permit applications till date. They will also be able to benefit from this policy if Immigration, Refugees and Citizenship Canada approves their application.

Fraser explained that the measure aims to address the labor shortage being experienced across Canada.

Currently, international students who apply to study in an eligible Canadian educational program may be authorized to work off-campus during their studies for up to 20 hours per week. This limit is removed during scheduled breaks such as summer and winter holidays. This policy allows international students to support themselves financially, as well as try to ensure that they remain focused on completing their studies rather than focusing on working in Canada. However, as a result of facing nearly one million job vacancies, the Canadian government has eased this rule for some time.

Fraser noted that the measure would potentially allow more than 500,000 qualified international students already in Canada to work more hours.

Canada is one of the world’s leading destinations for international students. In 2021, it hosted over 620,000 international students, a figure that has tripled in the past two decades. Canada issued about 450,000 new study permits last year alone. The demand for study in Canada remains strong due to various factors such as the quality of the country’s educational institutions, multiculturalism, the affordability of the Canadian dollar, and the work and permanent residency opportunities that the country offers.

According to research by the Canadian Bureau for International Education (CBIE), most international students report that they are interested in living in Canada as permanent residents after completing their studies.

Statistics Canada research shows that international students who go on to obtain permanent residency integrate quickly into the Canadian labor market due to factors such as their Canadian work and study experience, as well as English and/or French language proficiency. become.

This explains why Immigration, Refugees and Citizenship Canada (IRCC) offers a range of initiatives aimed at helping international graduates work and live in Canada.

IRCC offers the popular Post-Graduation Work Permit (PGWP). The PGWP enables eligible international students to obtain an Open Work Permit whose validity period corresponds to the length of their educational program in Canada. Open work permits allow foreign nationals to work in Canada for any employer of their choice. The maximum PGWP validity period is three years. PGWP holders can then gain the professional Canadian work experience they often need to become eligible for economic class immigration programs. Most of the major immigration routes offered by the IRCC are covered under the Express Entry System, with PGWP holders typically pursuing permanent residency through the Canadian Experience Class (CEC) program.

Canada has in recent years seen international students as a major source of permanent residents, particularly during the pandemic. For example, the IRCC relied heavily on international graduates to achieve its goal of landing more than 405,000 new immigrants in 2021, breaking Canada’s record for new immigrants in one year. The IRCC did this by inviting and fielding a large number of Canadian Experienced candidates. In addition, it introduced a time-limited temporary residence (TR2PR) program for permanent residence in 2021, which enabled some 90,000 temporary residents to apply for immigration.

Minister Fraser also has a mandate from Prime Minister Justin Trudeau to identify additional ways to obtain permanent residency through Express Entry for international students and temporary foreign workers. In addition, Fraser introduced a strategy in September that outlined how the government aims to help more temporary residents find permanent residency. The strategy includes five pillars, such as modernizing the immigration system to improve application processing times. We’ll find out more on the Canadian government’s newcomer strategy when they present their new Immigration Level Plan 2023-2025 by November 1.