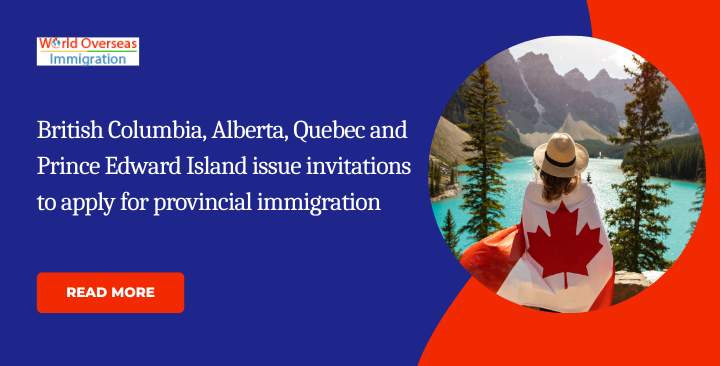 British Columbia, Alberta, Quebec and Prince Edward Island this week issued invitations to candidates to apply through provincial immigration programs. The Alberta and Quebec draws are recent publications of draws that took place in December.

Most Canadian provinces and territories (except Quebec and Nunavut) operate their own Provincial Nominee Programs (PNPs). Through these programs, interested candidates may be invited to apply for provincial nominations. Obtaining a provincial nomination can be beneficial in obtaining permanent residency.

The Alberta Advantage Immigration Program (AAIP) issued 129 invitations to apply for provincial nomination through the Alberta Express Entry stream on December 8 and has recently published these results. Candidates are required to have a minimum CRS score of 305.

Additionally, the province announced this week that it will invite Express Entry candidates to AAIP based on a combination of high-demand occupations and immediate family ties as selection factors when completing a draw from the federal Express Entry pool.

There is no change in the eligibility criteria in any stream of AAIP.

Quebec invited 1,047 skilled workers to apply for permanent selection on December 15. The results were published only this week.

The draw targeted candidates who had a business with a specific NOC and required candidates to have a job offer outside the Montreal metropolitan community and a minimum Arrima Expression of Interest score of 571 points.

Those invited by Quebec to apply for permanent selection have a maximum of 60 days to submit their application and pay the processing fee. Quebec aims to process completed applications within six months from the date all required information is received. This includes all forms and documents.

British Columbia invited more than 187 candidates to apply for the provincial nomination on January 17.

The province invited 154 candidates in a general draw consisting of technical occupations. Invitations were issued to candidates in the Skilled Worker and International Graduate categories and included Express Entry candidates and entry level and semi-skilled candidates.

On January 19, Prince Edward Island invited 216 candidates through the PEI PNP’s Labor and Express Entry streams. Seven candidates were also invited through the Business Work Permit Entrepreneur with a minimum point threshold of 62.

This was the first draw for PEI PNP in 2023. Draws are usually held on a monthly basis in the province.

Express Entry candidates who wish to be enrolled by PEI must submit a separate Expression of Interest (EOI) to PEI PNP.