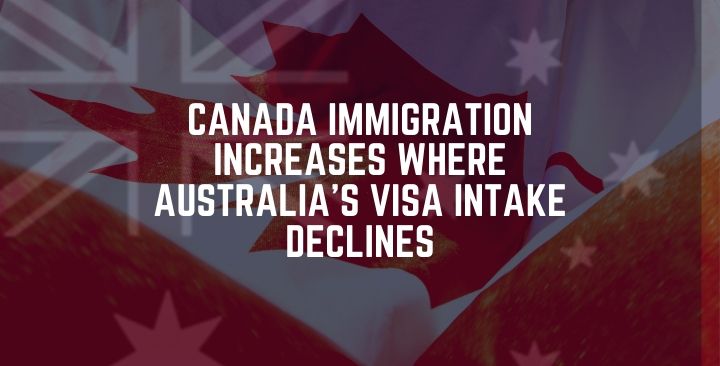 Currently the situation of Immigration is critical to the economic health of both Canada and Australia. In recent decades, the two countries have become increasingly reliant on new permanent residents and temporary visa holders such as international students and foreign workers to support their population, labour force, and economic growth.

This tells us that the 8 million immigrants in each country have an even larger—and more positive—impact on the economy and job creation.

Canada has been steadily increasing its immigration levels since the late 1980s, and in recent years, has been raising them more aggressively to support its economy. Australia also began to increase its levels in the late 1990s but it has shifted course over the last few years.

Few days before it was hit hard by the coronavirus crisis, Canada announced it would be targeting the arrival of 340,000 permanent residents in 2020 (which on a per capita basis, is 0.9 per cent of its population) and even higher levels in 2021 and 2022. Canada was previously averaging around 260,000 permanent resident arrivals per year until 2016 when it decided it would be aiming for at least 300,000 annual arrivals.

Canada is targeting 58 per cent of its immigrants to arrive under the economic class, 27 per cent under the family class, and 15 per cent for refugee and other humanitarian grounds.

Meanwhile, Australia announced last year that it was reducing its annual permanent resident target by 30,000 to 160,000 immigrants annually until 2023 (0.6 per cent of its population). Prior to the announced cut, Australia had frozen its target at around 190,000 immigrants for eight straight years.

Under Australia’s current plan, 70 per cent of immigrants will arrive under the economic class and 30 per cent under the Australia family class

Canada is inviting even more immigration candidates during COVID-19 pandemic

. The coronavirus pandemic has understandably affected both country’s immigration systems, however Canada is still trying to come as close as possible to achieving the economic class targets outlined in its immigration levels plan.

In April, Canada issued 11,700 invitations to apply for permanent residence under its federal Express Entry application management system, compared with 7,800 the previous month, and 8,000 in February. In addition, Canada’s provinces continue to provide Canada permanent resident pathways for immigration candidates during this period.

On the other hand, the pandemic has resulted in a significant decline in Australia’s economic class invitations.

Last month, Australia issued 100 invitations under its Skill Select expression of interest system, compared with 2,050 in March, and 1,500 in February.

Canada and Australia welcome immigrants due to their aging populations and low birth rates.

The median age in Canada is 41 while it is 38 in Australia.

Canada’s birth rate is 1.5 while it is 1.7 in Australia. In both cases, the birth rate is below what is needed to simply replace the population (2.1 babies per woman).

In 2018-19, Canada’s population grew by 1.4 per cent (531,000 people), with 82 per cent of the population growth due to permanent and temporary resident arrivals, and 18 per cent from natural increase (births minus deaths).

Immigration has proven vital to both countries’ abilities to support labour force growth, which is among the two ways to grow the economy. The other way is to use your workers more productively.

In addition, immigrants help to alleviate the fiscal pressures both countries face due to their aging populations since the economic activity generated by immigrants helps to support the government revenues that are necessary to fund vital social services such as health care, which is only becoming more expensive to deliver due to rapid population aging.

How will Canada and Australia respond post-coronavirus?

Given how fluid the coronavirus crisis is, no one can predict the future of Canada and Australia’s immigration policies. However, Canada’s decision to invite more Express Entry immigration candidates last month is telling of its desire to maintain high levels of immigration to support its economy.

In addition, there are four factors that have enabled Canada to sustain high levels of immigration, even following difficult economic periods including after the 2008-09 global financial crisis.

The four factors of Canada’s history, geography, policies, and politics could see Canada stick closely to its 2020-2022 Immigration Levels Plan once the pandemic is behind us.