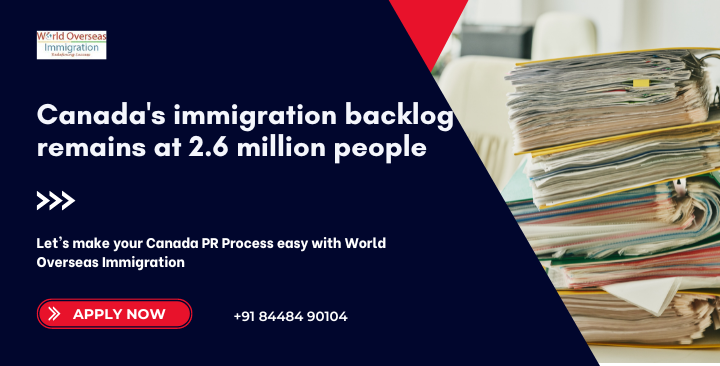 IRCC has released new data showing that the size of the backlog has remained unchanged over the past one month.

Canada’s immigration backlog remains at 2.6 million people, according to new Immigration, Refugees and Citizenship Canada (IRCC) data. IRCC released the updated data on its website on 14 October, which is operational till 30 September.

As of July 2021, inventory across all segments of the business has progressed as follows:

The website divides applications into permanent residence, temporary residence and citizenship applications. Of these, the IRCC is reporting that they have processed 1.11 million, within service standards, or less than 50% of the applications.

A service standard is the internal benchmark IRCC sets for processing applications for each line of business. In other words, there is a target set by the IRCC to process the average application for a given immigration program.

Service standards differ from the actual average time taken by IRCC to process applications for each programme. Earlier this year, IRCC announced that it will provide regular updates on its website along with average processing time to provide more transparency to the applicants.

Six months is the standard for permanent residency applications through the Express Admissions programmes. This is longer for other economic class lines of business. The IRCC says its service standard for spousal and child family class sponsorships is 12 months.

Temporary residency applications have service standards that are between 60-120 days depending on the type of application (work or study) and if it was submitted from Canada or abroad.

Citizenship applications have a service standard of 12 months, with an additional four months between the approval of an application and being scheduled for the citizenship ceremony.

The total current number of applications has not changed significantly from the last IRCC update in September. However, the distribution of backlogged applications based on the line of business has shifted.

There has been a surge in applications for permanent residency while both citizenship and temporary residence applications have seen a decline. This comes as the all-program express entry draw resumed on 6 July and IRCC invited 1,500 candidates to apply for the PR. Since then, IRCC has invited an ever-increasing number of candidates to each draw, with the most recent draw in which 4,250 candidates have secured ITAs.

The numbers in the inventory are as follows:

When will the backlog decrease?

The IRCC webpage also contains a forecast of what the backlog is expected to look like over the next several months. For example, the webpage projects that federal highly skilled applications for permanent residency, as well as applications through the provincial nominating program, will have only a 20% backlog by December 2022. Families, spouses and children (except Quebec) applications for PR will have a backlog of 19%.

There is expected to be a 25% backlog in citizenship applications by December 2022.

There will be a 58% backlog in temporary resident (visitor) visas.
The study permit will have a 23% backlog and;
There is an estimated backlog of 30% in work permits by March 2023. IRCC expects the backlog to actually increase to 60% before falling again in December 2022.
IRCC’s Steps for Reforms

IRCC has acknowledged the backlog and stated that it is taking steps to improve the speed of processing of applications. In June, Prime Minister Justin Trudeau created a task force to evaluate the current backlog in services and suggest short- and long-term improvements. To that end, on September 1, Immigration Minister Sean Fraser announced a number of upgrades to the system.

IRCC on 23 September announced 100% coverage for most permanent resident programs.

IRCC began the transition towards 100% digital applications for most permanent resident programs on September 23, with accommodations made for those who are unable to apply online. This transition also includes citizenship applications, which are now 100% online for all applicants over the age of 18. IRCC is aiming to make all citizenships applications digital by the end of this year, including those for minors under 18.

The department is also hiring 1,250 new staff by the end of autumn to increase processing capacity and says it is modernizing and streamlining the system.