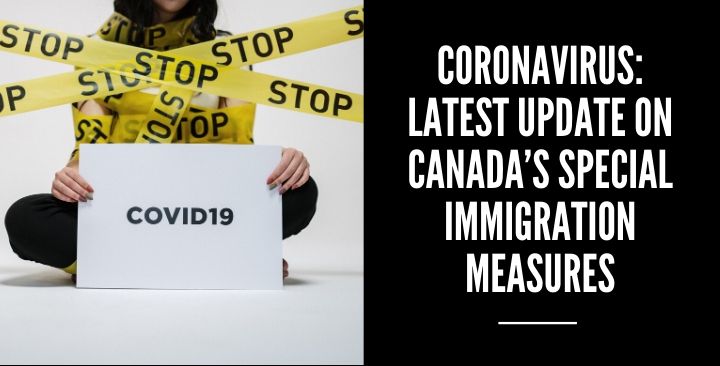 The Canadian government has made sweeping changes affecting travel and immigration services during the coronavirus pandemic.

Canada has implemented travel restrictions and modified immigration policies to both help contain the spread of the coronavirus while at the same time serving the needs of immigrants, foreign workers, international students, and Canadian employers.

Here is an overview of major immigration-related developments since the federal government began rolling out changes in March 2020.

Who is exempt from Canadian travel restrictions?

The following are among the list of people allowed to enter Canada by land or air while the travel restrictions are in place until June 30, 2020:

Confirmation of Permanent Residence (COPR) holders who are unable to travel because of coronavirus-related disruptions can contact IRCC via its web form to explain their situation. They can expect IRCC to advise them about the next steps.

It is also mandatory for all travellers to self-isolate for 14 days after their arrival to Canada. As of today, April 15, all new arrivals to Canada must wear a mask or face covering before they can proceed to their final destination. They must also have a credible quarantine plan, or they will be forced to stay in a hotel.

What do Canada’s special measures mean for immigrants?

IRCC has confirmed that Express Entry draws will continue, and they will also continue to process applications for permanent residence. However, IRCC has indicated there may be delays in processing for those who are approved for permanent residence after March 18. These applicants will likely not have their application processed within six months.

Family class immigration has been the least affected by the travel restrictions. Immediate family members of citizens and permanent residents are still allowed to enter the country, spousal and common-law sponsorship applications are being processed as usual, with IRCC allowing some flexibility in submitting incomplete applications. However, Canada has postponed the opening of the 2020 parents and grandparents immigration program.

Canada considers the following to be immediate family members:

Travellers who fall into one of these categories must self-identify to airlines by presenting documented proof of their relationship to a Canadian citizen or permanent resident.

Refugee claimants who need to update their contact information can use the IRCC web form.

Immigration loan collections are also being suspended until September 2020.

Foreign nationals are still allowed to travel to Canada for work, even with the travel restrictions in place.

The worker may not be required to obtain a work permit if they are:

These foreign nationals can self-identify to airlines by presenting documents such as a letter of invitation from a relevant Canadian organization. This letter may come from a federal, provincial, or municipal government entity for emergency services providers, teaching institutions for medical students or shipping agents for people joining vessel crews.

International students who were approved for a study permit on or before March 18 are exempt from travel restrictions.

If in-class courses were moved to an online-only format in response to the coronavirus outbreak, international students will still be eligible for the Post-Graduation Work Permit (PGWP) program.

This includes students who have a study permit, or who were approved for a program that is starting in May or June, but who are unable to travel to Canada amid travel restrictions. International students in this situation can begin their classes while outside Canada and may complete up to half of their program while abroad if they cannot travel to Canada sooner.

Our office is in South Delhi. You can come in the office directly for any immigration process query. But it will be beneficial for you complete your free assessment visa form before the meeting. So that the consultant has all the knowledge about your profile and he can guide you properly.