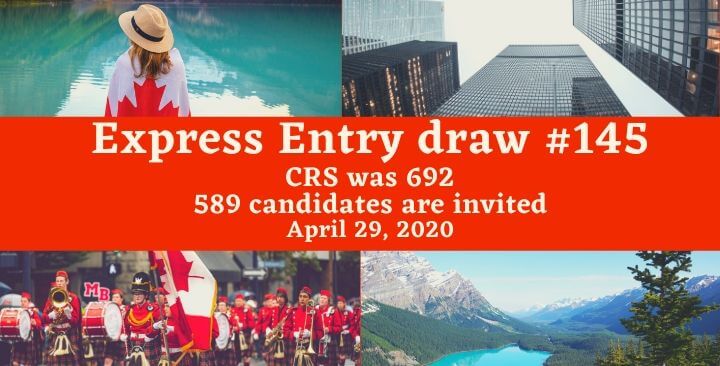 Express Entry candidates invited in the April 29 draw were required to have a provincial nomination. Canada invited a total of 589 candidates in this Express Entry draw with a minimum Comprehensive Ranking System (CRS) score requirement of 692. With an additional 600 points from having a provincial nomination, that means the basic human capital points requirement was only 92.

This is the lowest CRS requirement for a provincial nominee program (PNP)- specific Express Entry draw so far this year. It is six points under the April 9 draw, which invited provincial nominees with a CRS of at least 698.

Even though coronavirus has changed the landscape of immigration in Canada, the year has started off as a great one for Express Entry

The previous draw, held on April 16, even saw the minimum Comprehensive Ranking System (CRS) score drop to 455 — the lowest score requirement of 2020.

Immigration, Refugees and Citizenship Canada (IRCC) already issued 8,389 Invitations to Apply (ITAs) so far in April. Prior to April, the most ITAs that IRCC had issued in a single month this year was 8,000 back in February.

Eligible candidates are entered into the Express Entry pool and are ranked based on a CRS score that considers factors such as age, education, skilled work experience and proficiency in English or French.

A set number of the highest-ranked candidates are issued an invitation to apply for Canadian permanent residence through regular draws from the Express Entry pool.

IRCC used its tie-break rule in this draw and the date and time used was March 11, 2020 at 13:46:21. This means that all candidates with a CRS score above 692, as well as those candidates with scores of 629 who submitted their profile before this specified date and time, received an ITA in this invitation round.

Express Entry candidates with scores below today’s CRS cut-off have a variety of potential options for increasing their points total, the most valuable of which is a provincial nomination.

Nine Canadian provinces and two territories have provincial nominee programs that allow them to nominate a set number of economic immigration candidates each year for permanent residence.

Each participating province and territory has at least one immigration stream that is connected to the Express Entry system and allows it to nominate Express Entry candidates for permanent residence in that province or territory.

Express Entry candidates who are nominated by a province or territory receive an additional 600 points toward their CRS score, moving them to the front of the line for an invitation to apply for Canadian permanent residence.

Several of Canada’s Express Entry-aligned provincial nomination streams have issued invitations since COVID-19 travel restrictions were put in place on March 18, 2020, including streams in Alberta, Manitoba, Saskatchewan, Nova Scotia and British Columbia. In fact, Canada’s various PNP streams have held more than 30 draws since the start of 2020.