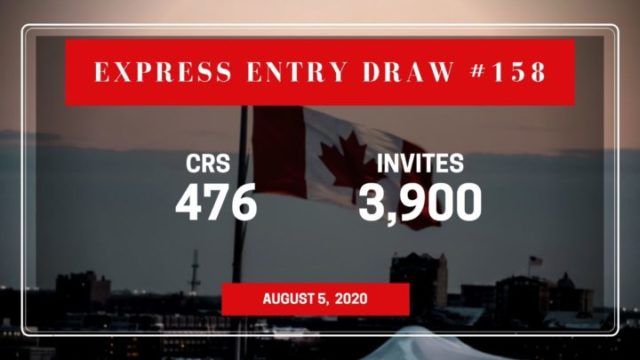 This is the 2nd all-program draw held by Canada, Express Entry candidates are invited to apply for permanent residence.

3,900 invitations to apply are issued in the new Express Entry draw on August 5, 2020, and the minimum Comprehensive Ranking System (CRS) score in this round was 476.

Immigration, Refugee and Citizenship Canada (IRCC) is issuing 3,900 ITAS every two weeks for most of 2020 through express entry. Whereas IRCC deviated from all programs between March 18 and July 8 and was targeting candidates in only two specific programs during that time. Period, which changed last month. On 8 July, the IRCC held an all-program draw on 22 July and 23 July before returning to the program-specific draw again, suggesting that it could begin alternating between these two types of draws Because things slowly return to normal.

The number of ITAs issued in 2020 was unaffected by temporary policy changes and remained constant throughout the year. The year began with two draws of 3,400 ITAs each in January, followed by a draw of 3,500 ITAs and a record 4,500 in February. Since March, the IRCC has held 21 drawings and issued nearly 40,000 ITAs.

The top ranked candidates in the Express Entry pool receive ITA in regular rounds of invitation.

Today’s minimum score of 476 was 2 points lower than the previous all-program invitation round on July 8, which had a cut-off score of 478.

Immigration Refugees and Citizenship Canada (IRCC) applied a tie break rule in today’s draw; candidates had to have submitted their profiles before  July 27, at 01:02:47 UTC. This means that all candidates with CRS scores above 476, as well as those with scores of 476 who entered their profile in the Express Entry pool before this date and time, received an ITA.