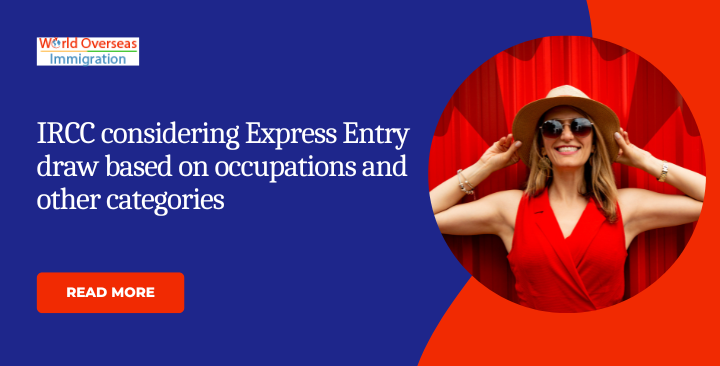 The department plans to do this by creating Express Entry categories, which target key attributes such as educational credentials, work experience, or knowledge of an official language, rather than just a high score within the Comprehensive Ranking System (CRS).

IRCC said it will consider inviting Express Entry candidates based on occupational background, areas of the economy with labor shortages, whether candidates reside in Canada as international students or temporary foreign workers, and the candidates’ French language proficiency. are doing.

Currently, eligible candidates applying for permanent residency through these programs are assigned a score using the CRS. Those with the highest scores are most likely to receive an Invitation to Apply (ITA).

The result of the counseling process has not yet been published as the counseling process was recently concluded on January 8, 2023. However, IRCC has said that targeted draws are likely to start in spring this year. Once the categories are decided by the minister, they will be announced before the invitation is issued.

IRCC is considering creating a category that includes experience of working in particular occupations or sectors that have been facing labor shortage for a long time. As part of the consultation process, the IRCC asked respondents to outline areas of the labor market facing long-term shortages and make suggestions on how immigration could complement Canada’s existing workforce.

For those candidates invited to apply for permanent residence through Express Entry between 2019 and 2021, the most common primary occupations were:

IRCC says a possible category for selection in Express Entry focused on international student graduates may respond more directly to the severe shortfall. For example, a new Express Entry category may include graduates with degrees or diplomas in in-demand fields from a designated educational institution.

IRCC notes that graduate international students are well positioned for permanent economic migration because they are proficient in at least one official language and have Canadian educational qualifications as well as work experience. They are often in their prime working-age years, which means they will be able to contribute to the Canadian economy for years to come.

More than 88,000 international graduates transition to permanent residency through Express Entry in 2021, an 80% increase since 2017. Even so, obtaining permanent residency in Canada on a Post Graduation Work Permit (PGWP) can be time consuming and difficult. ,

In general, immigrants with previous temporary Canadian work experience have been found to have better labor market integration and are better equipped to transfer their skills when needed.

In 2021, approximately 168,600 people transitioned from temporary worker status to permanent residency, representing 64% of entrants in the economic immigration category.

IRCC is also considering inviting candidates on the basis of their ability to speak French. It may invite French-speaking and bilingual candidates alike.

In 2019, Canada launched the Francophone Immigration Strategy, which set a target of 4.4% of new immigrants from outside Quebec speaking French by the end of 2023.

Of the 110,000 economic class francophone immigrants who settled in Canada between 2017 and 2021, only 30,000 chose to settle outside Quebec. By inviting more francophone candidates through Express Entry, the government will be able to strengthen Canada’s bilingual character as well as fill labor gaps in communities where speaking French is essential to an occupation.

The changes to Express Entry are in response to Canada’s aging population and one of the lowest global birth rates at 1.43 children per woman. As the population grows, the demand for social services increases and the tax base shrinks. Without increased migration of skilled workers to support Canada’s social systems, such as health care, there will be serious difficulties in supporting the population.

Some of the most critical labor shortages have become apparent as the global economy moves towards a green, digital economy and automation. The shortfall is partly due to skills gaps and rising job vacancies in key sectors such as construction, health care, and professional, scientific and technical services. All are fields that require long and specialized training.

In the most recent ministerial mandate paper, a document that outlines the government’s priorities, the immigration minister should address these objectives, among other things:

To help meet these goals, Bill C-19 received royal assent on June 23, 2022. Under the Bill, the Minister of Immigration may invite candidates for Express Entry based on key characteristics that would support economic priority.

This does not mean that the IRCC will no longer use the Comprehensive Ranking System for Express Entry. Candidates meeting the criteria for a particular category will be ranked as per their CRS score and the top among them will be invited to apply.

Category-based selection will be of only those candidates who qualify for programs managed under Express Entry.