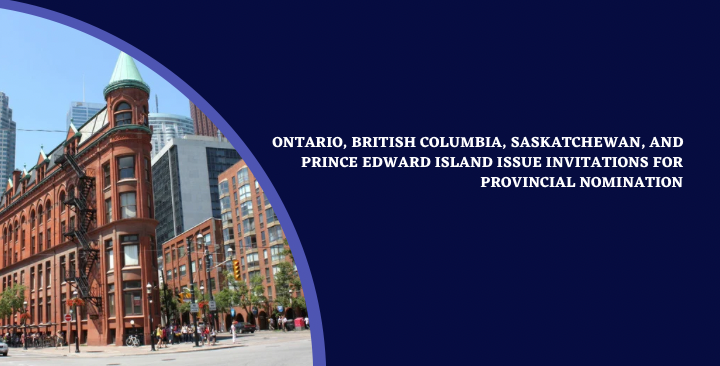 On December 20, Ontario issued letters of interest to candidates in the Express Entry Human Capital Priority stream who had work experience in targeted technology occupations.

Candidates must already be in the Express Entry pool under the Canadian Experience Class (CEC) or the Federal Skilled Worker Program (FSWP).

British Columbia issued 153 invitations to apply to candidates in a targeted take draw on December 20.

Invitations were issued to candidates in the Skilled Worker and International Graduate categories and this included Express Entry candidates.

Candidates need a minimum SIRS score of 90. SIRS works much like the Express Entry Comprehensive Ranking System (CRS), but is used only for the PNPs of British Columbia.

The province invited 153 candidates under the Express Entry stream, and 315 under the Occupational-in-Demand stream, for a total of 468 invites issued. Candidates of both the categories need a score of 80.

On December 15, Prince Edward Island invited 127 candidates through the PEI PNP’s Labor and Express Entry streams. Seven candidates were also invited through the Business Work Permit Entrepreneur with a minimum point threshold of 62.

This brings the total number of candidates invited by the province so far in 2022 to 1,854.

Express Entry candidates who wish to be enrolled by PEI must submit a separate Expression of Interest (EOI) to PEI PNP.

EOI profiles are given a score based on PEI’s score grid and like the Express Entry Comprehensive Ranking System (CRS), the highest ranked candidates are invited to apply through it. monthly draw