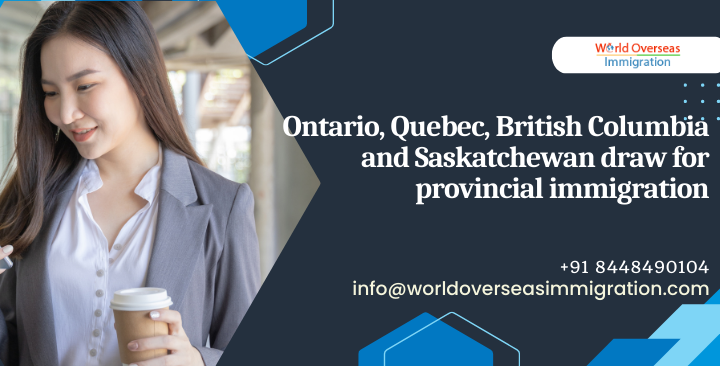 The four provinces invite candidates to the most recent round of the PNP draw.

PNP was introduced in 1998 and now accounts for over 80,000 PR admissions per year. The increase in the number of PNP admissions in Canada is because federal and provincial governments see it as an effective tool to boost the country’s economic development outside of provinces and urban centers with already high immigrant populations.

On 15 September, Quebec invited 1,009 skilled workers to apply for permanent selection. The draw was targeted to candidates who had work experience in demanding occupations and a valid job offer outside the area of ​​the Communauté métropolitaine de Montréal.

Quebec has drawn this eleventh draw in 2022 and the second draw in the month of September. This is unusual because Quebec usually only has a draw once a month. Quebec does not typically release draw results until one to two weeks after a draw has taken place.

Those who are invited by Quebec to apply for permanent selection have a maximum of 60 days to submit their application and pay the processing fee. Quebec aims to process completed applications within six months from the date all required information is received. It contains all the forms and documents.

The Ontario Provincial Nominating Program (OINP) held two draws in the past week. The first draw was for the French Speaking Skilled Workers stream on 23 September. The province invited 363 candidates and the minimum score was 326.

The program is tied to Express Entry and candidates must be French speakers with strong English abilities.

The second draw was in the Human Capital Priority stream. The province issued 1,179 invitations through OINP on 28 September as part of a targeted draw for tech businesses. All candidates had job experience in specific technology-related occupations.

More than 258 candidates were invited to apply for provincial nomination in British Columbia on September 28.

Most candidates, 215, were invited in a targeted draw for tech occupations. The invitations were issued to candidates in the Skilled Worker and International Graduates categories and included Express Entry candidates.

Candidates who were invited in the target tech draw had minimum SIRS scores of 100. SIRS acts much like the Express Entry Comprehensive Ranking System (CRS) but is only used for British Columbia’s PNP.

The province also held rounds of invitations for candidates working in the following occupations.

British Columbia recently announced that will be pausing draws under the BC PNP between October 12 and November 16 due to the transition from NOC 2016 to NOC 2021, an updated method of assessing a candidate’s skill level in economic immigration programs.

Saskatchewan has invited 639 candidates under the Express Entry stream and 507 under the Occupations-in-Demand stream of the Saskatchewan Immigrant Nominee Program (SINP), for a total of 1,146 candidates.

The draw is in line with draws throughout the summer, the most recent of which invited over 1,000 candidates. This is the first draw since 7 September. There was no draw last week, making it the first week since 6 July without a SINP draw.