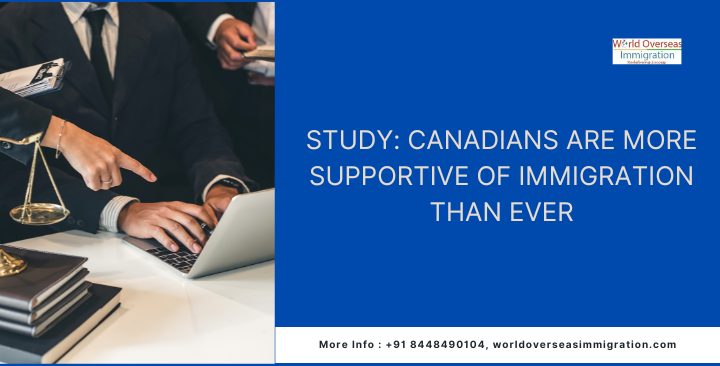 The Environics Institute of Canada in partnership with the Century Initiative has released survey data on Canada’s opinion on immigration. The Environics Institute is a research agency that conducts opinion polls and collects data on Canadian issues such as the government or economy. The Century Initiative is a registered charity run by business leaders and academics that advocates for Canada’s population to reach 100,000,000 by 2100.

The overall conclusion of the survey is that more Canadians are in favor of increased immigration than ever before. When asked whether Canada has a very high immigration level, nearly 70% of Canadians disagreed or strongly disagreed.

This is the highest support shown for immigration in the survey’s 45-year history, and 2021 census data shows that immigrants make up 23% of Canada’s total population, or 8.3 million people. It estimates that number will increase to 34% by 2041.

The data was collected through telephone interviews conducted with 2,000 Canadians between September 6 and 30, 2022. A sample of this size drawn from a population gives accurate results within plus or minus 2.2 percentage points in 19 out of 20 samples.

In all responses, as in previous years, the study found that immigration and support for immigrants is often related to a person’s political leanings. Since 2021, there has been an increase in overall support for high levels of immigration among supporters of the federal Liberal Party (79%, up 4), the NDP (85%, up 4) and the Green Party (84%, up 19) . In contrast, 43% of Conservative supporters believe immigration levels are too high, but this is still a drop of 1% in the 2021 study.

Support for immigration despite pandemic difficulties

The data comes at a time when Canada is dealing with the aftermath of the COVID-19 pandemic, a historic labor shortage and a record one million job vacancies. In response, Canada is increasing targets under the Immigration Levels Plan. The current plan targets between 432,000 and 451,000 new immigrants to Canada by 2024. A new plan is expected by November 1.

More than 50% of Canadians surveyed believe that Canada needs more immigrants to increase its population. The most notable changes in the 2021 figures show that people in Manitoba and Saskatchewan changed their minds, a 15-point increase from the previous year. Alberta and Ontario are also up three points.

Atlantic Canada, which has tripled its number of immigrants in the past five years, showed less support for immigration than in the past, declining nine points.

There is also a prevailing sentiment that immigrants are essential to economic development in Canada. By increasing the population through immigration, Canada also increases its tax base.

Most respondents were positive about Canada’s commitment to providing a safe haven for refugees, especially those fleeing conflict zones. However, the survey shows that some people have concerns over the ability of refugees to integrate into Canadian society and the impact it will have on the country’s culture and identity. This was particularly notable in Quebec, which attempts to implement economic immigration policies promoting its unique francophone culture and identity.

However, when asked whether Canada accepts too many immigrants from ethnic countries, the results show that a growing majority of Canadians, Quebec included, reject that idea.

There is still some belief among Canadians, 37% agreeing or strongly agreeing, that some refugees are not legitimate or “real” refugees. As with all other questions, the percentage of respondents who adhere to this belief is higher among conservatives or supporters of bloc Québécois. Regionally, Alberta has the highest number of people who believe in it, but Atlantic Canadians are also increasingly in agreement, up eight points from the 2021 survey.

Nevertheless, the survey indicates that Canada as a whole rejects the idea that there are too many racial minority immigrants in Canada. People who agree with that statement are typically over age 60 or do not hold a high school diploma.

This is a major change from the overall figures of the 1990s when public opinion on the issue was almost equally divided.