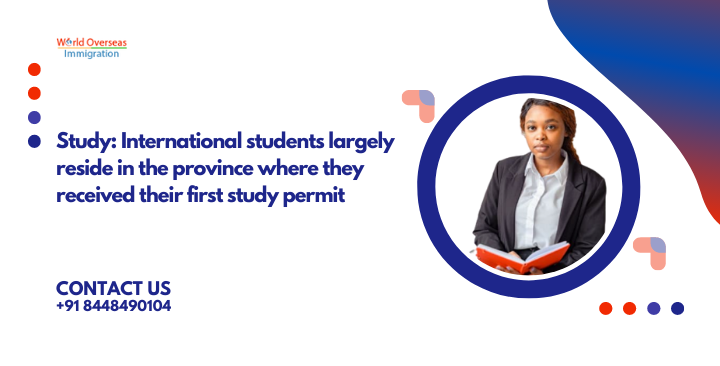 A recent analysis of international students in Canada shows that the majority of those who obtain a study permit in a certain province remain in that province for the next period of their study or work.

The Conference Board of Canada is a non-profit research organization focused on analyzing economic trends, organizational performance and issues related to public policy. Although the Conference Board of Canada states that provincial governments can further increase international student retention in the province/region of study, research to this point indicates that there has already been a notable degree of success with respect to that goal. .

Let us now learn about the main points of this research study.

Disposal location one year after the first study permit expires

Of the students who chose to stay in Canada when their first study permit expired, no less than 60% remained in any of Canada’s 10 provinces or three territories.

In the case of all 13 individual regions, more than 75% of international students remained in the province/region to pursue further education.

Measured based on the location from where international students filed their taxes, the same findings as above (after one year) appeared to hold true even three years after their initial study permit expired.

In other words, most former international students were still employed in Canada three years later and remained in their initial province of study. In fact, in nine of Canada’s 13 provinces and territories – excluding the Atlantic provinces: Newfoundland and Labrador, Nova Scotia, Prince Edward Island and New Brunswick – more than 50% of international students stayed in the province or territory.

The Conference Board of Canada argues that a post-secondary education system that aligns skills development with local labor market needs will aid in retention, as will continued strong provincial funding for these institutions as this allows them to provide students with high-quality education. Will help to continue to provide quality education.

In addition, dedicating a greater portion of Provincial Nominated Program (PNP) slots to international students and improving the assistance provided to these foreign nationals through settlement services may entice them to remain in provinces where They come to further their education.