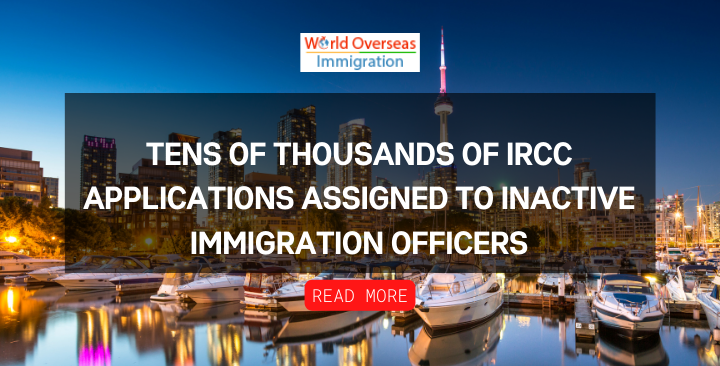 According to a recent Access to Information and Privacy (ATIP) request, nearly 60,000 applications have been put on hold due to mismanagement.

ATIP requests (a legal recourse for requesting information from government organizations) – submitted by the Canadian Broadcast Corporation (CBC) to 779 inactive Immigration Refugees and Citizenship Canada (IRCC) officials (59,456) pending and re-opened Applications were submitted. processing. Inactive officers are users who no longer use, nor have access to, the Global Case Management System (GCMS) – IRCC’s universal system for processing applications for citizenship and immigration services.

Active cases were assigned to inactive officers spread across Canada’s airports, border ports and processing centres; As well as officials from consulates in India, the US, the Philippines, Brazil and others.

The ATIP request also disclosed the inactive immigration officers’ unique placeholder codes, their last login date in GCMS and the number of applications assigned to them.

IRCC officials can only be publicly identified through these placeholder codes, which applicants can view on their GCMS notes. GCMS notes are requests that individuals can make under ATIP to obtain IRCC’s notes on their immigration application; Correspondence from IRCC, documents received from the applicant, detailed notes from officers reviewing the file and other relevant information.

At this time, it is unclear why IRCC is providing the application to inactive users; However, according to the CBC, IRCC was unable to remove these inactive users from the GCMS because traceability would be lost.

In light of the increased scrutiny, and continued need to welcome newcomers to Canada; IRCC has tried to take measures to deal with the huge number of applications. The department hired 1,250 more employees, and committed to using more advanced data analytics to accelerate application processing speed; Investing millions of dollars to develop a new department-wide digital system that will eventually replace GCMS by 2023.

The application backlog has also decreased in recent months, with 2.2 million people standing as applicants as of 9 December 2022.

Despite these advances, however, IRCC continues to aspire to previous service standards, as it struggles with a large number of backlogged applications. Its effects can be seen more dramatically in immigration streams with smaller goals – such as the Parent and Grandparent Program (PGP), which operates on the basis of a lottery system with annual selection. The past two years have seen IRCC simply recycle applications submitted to its 2020 pool; A departure from previously used procedures, which has an adverse effect on elderly applicants of PGP.

While the department has made a profit in 2022 (and committed to more measures in the years to come), it is clear that IRCC has not yet reached its pre-pandemic application level and has been able to re-establish service standards and normalcy. To do this, these shortcomings should continue to be removed. application processing.