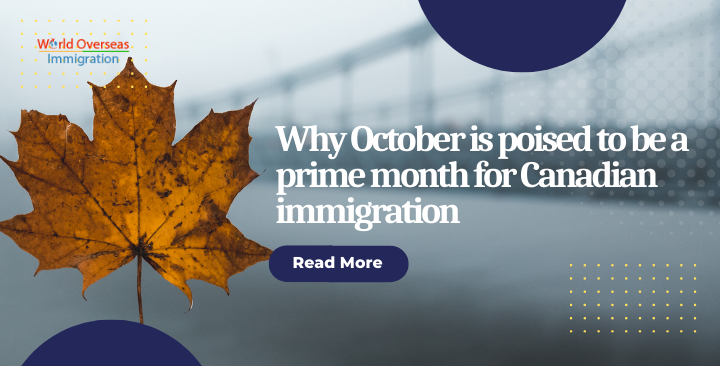 Next month there will be announcements for the Parents and Grandparents Program, the Immigration Level Plan 2023-2025, Statistics Canada Census data and more.

The coming month is going to be a busy one for the Canadian immigration sector. Several developments are expected at the end of the year in the coming weeks that will lay the foundation for immigration goals and trends for the next year and beyond.

Immigration, Refugees and Citizenship Canada (IRCC) will announce the process for PGP 2022 in late October and the Immigration Level Plan 2023-2025 by November 1. Additionally, Statistics Canada will publish census data on immigration from 2021, the first time in five years.

It is also likely that the minimum Comprehensive Ranking System (CRS) score for the newly introduced All-Program Express Entry draw will continue to decline until the score is below 500, as was the norm before the COVID-19 pandemic.

On 6 September, the IRCC informed CIC News in an email that the facility to apply for the Parents and Grandparents Program (PGP) would be available in the coming weeks.

Under this program, applicants can sponsor their parents or grandparents to immigrate to Canada. In previous years, the IRCC has decided which parents and grandparents will be eligible for a visa by lottery. However, it is unconfirmed whether the same will happen this year and the IRCC will unveil the process as part of the announcement.

Sponsor must be a Canadian citizen or permanent resident who is over the age of 18 and able to demonstrate that they exceed the minimum required income for the sponsorship. They are also required to sign an undertaking, a document that states they are willing to support their parents or grandparents for 20 years (or 10 years if the sponsor lives in Quebec).

In 2021, the IRCC held a lottery for the PGP inviting 30,000 Canadians to submit their applications for sponsorship. Last year’s figures were higher to compensate for the lower figures in 2020. Due to the onset of the pandemic, IRCC allowed only 10,000 sponsors to apply for the PGP in 2020.

Statistics Canada collects data from all Canadians each year to better understand how Canadians live. For example, their income group, how many people they live with, and the languages ​​spoken, among other factors. This data is used by the government to better assess the real-life situations of Canadians to better estimate their needs.

New census data will show the number of immigrants living in Canada, where they have chosen to settle, what languages ​​they speak at home and how many people they live with. This will help shape the outlook for immigration initiatives such as immigration level planning in the future.

The data will be made public in the last week of October.

IRCC resumed all event express entry draws last July after a gap of more than 18 months. The preliminary draw on 6 July invited 1,500 candidates to apply for permanent residency with a minimum Comprehensive Ranking System score of 557.

From 6 July onwards, the minimum CRS has been continuously decreasing with each draw. The first five draws had a draw of 8 or 9 points and the two most recent draws on 14 and 28 September saw a drawdown of only 6 points each. The most recent score on 28 September was 504. If this trend continues, the score for the all-program draw could drop below 500 for the first time since the draw on December 23, 2020, when the CRS score was 468.

Each year the IRCC issues an immigration level plan to serve as a guideline for the number of immigrants that will be allowed to immigrate to Canada each year. This includes the breakdown of immigrants by economic class, family class and humanitarian class programs over the next three years.

This year looks like IRCC is all set to set more record breaking targets. The target for 2022 is approximately 432,000 new permanent residents and over 451,000 by 2024. immigration spell