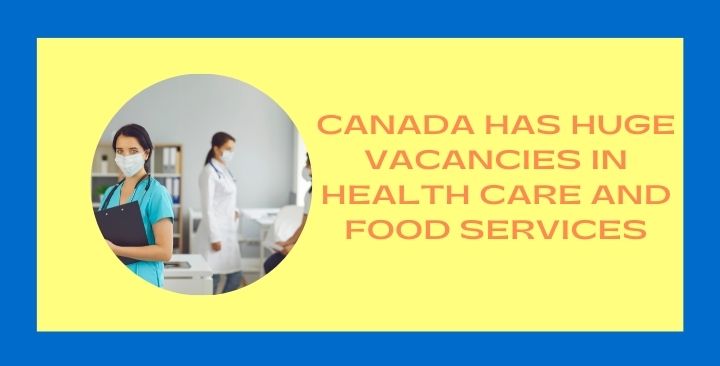 Canada has huge vacancies in health care and food services

Canadian employers were actively recruiting for an estimated 671,100 positions in May. For the seventh consecutive month, the health sector had the highest number of job openings in Canada. There were about 107,300 open positions in health care in May, nearly one sixth of all job vacancies. Accommodation and food services had the second-highest number of openings at some 78,000, followed by retail trade which had 73,800 job vacancies.

B.C. followed closely behind at 5 per cent, and New Brunswick came next at 4.9 per cent. Newfoundland and Labrador had the lowest job vacancy rate at 2.8 per cent.

The accommodation and food services sector had a vacancy rate of 7.8 per cent. This high rate could reflect seasonal hiring, as well as recruitment challenges. While restaurants were shuttered, and employees forced to take up social assistance, recruiters reported having a difficult time calling back their staff.

The lack of international students who often work in this sector, has also played a part in vacancy rates.

Economist Andrew Agopsowicz wrote that, during the pandemic, the number of retirements and people quitting their jobs due to dissatisfaction dropped significantly. Now that the economy is starting to recover, the number of job quitters is returning to pre-pandemic levels. Retirements delayed by the pandemic could also pick up in the second half of 2021. These factors could exacerbate labour shortages throughout the summer and fall.

Although, intake picked up in June when Canada welcomed about 35,000 new permanent residents. While July figures are not yet released, the opening of the Canada border to approved permanent residents could help increase these numbers.

Federal government’s immigration target is 401,000 this year, they will need to admit about 43,000 new immigrants per month from July onward in order to achieve this goal.