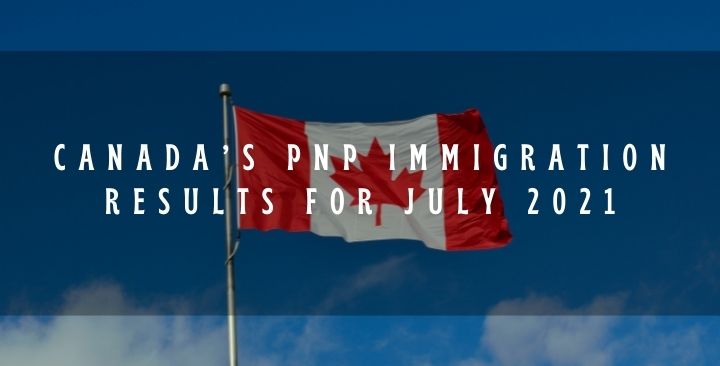 Canada’s Provincial Nominee Programs (PNPs) issued over 6,000 invitations to apply for provincial nominations in the month on July 2021.

Canadian provinces and territories, except Quebec and Nunavut, operate their own Provincial Nominee Programs (PNP). Each province adopts its own criteria for selecting foreign workers eligible for Canadian permanent residence under its respective PNP. Having their own immigration programs allows provincial governments to select individuals who are best suited to meet their local labour market needs.

Canada PNP programs alone are expected to result in over 80,000 immigrants per year becoming permanent residents between now and 2023.

Most participating provinces and territories have at least one PNP stream that is aligned with the federal Express Entry system, which is Canada’s principal source of economic immigration.

IRCC has been holding PNP-specific Express Entry draws, on average, every two weeks since the beginning of the year.

The province held a total of six draws this month through the Ontario Immigrant Nominee Program (OINP). The first draw took place on July 7 with the province issuing 21 invitations to apply under the Entrepreneur Stream. On July 13, the province held major draws inviting 1,685 candidates through the Employer Job Offer: Foreign Worker and Employer job offer: International Student streams.

The Alberta Immigrant Nominee Program (AINP)’s Express Entry Stream issued invitations to immigration candidates in one draw in July. The draw was held on July 14 and invited 181 candidates with CRS scores of 301. This is a slightly slower pace of invitations than in previous months when regular rounds were held approximately every two weeks.

In July, the Saskatchewan Immigrant Nominee Program (SINP) held a total of four invitation rounds through the Express Entry and Occupations In-Demand sub-categories of the International Skilled Worker Category issuing a total of 570 invitations to apply for a provincial nomination. This is significantly more than the 255 invitations issued last month by the province.

July was a very busy month for the province as it issued 1,417  invitations to immigration candidates under the Manitoba Provincial Nominee Program. The province held two draws through the following three streams: Skilled Workers in Manitoba, International Education Stream, and Skilled Workers Overseas.

Over the past month, the province has invited a total of 885 candidates to apply for a provincial nomination through the Express Entry British Columbia, Skills Immigration streams closely matching the number of invitations issued over the past months.