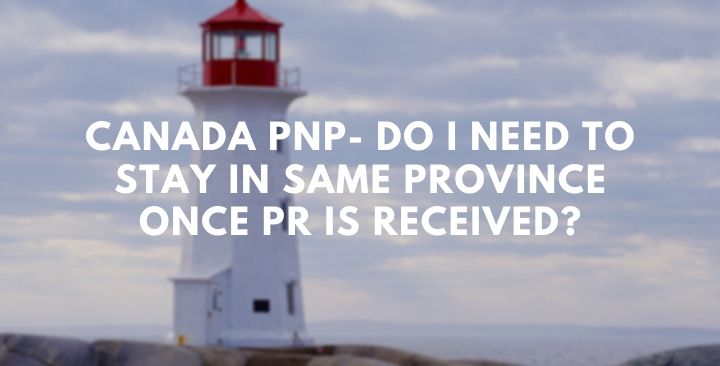 If you are an applicant Canada PNP, it is clear from your side to be concerned about the conditions of living in the same province after obtaining Canadian permanent residency. Canada PNP however work in coordination with the IRCC and also articulate the admission system, however, they also have their own set of requirements and conditions.

What is Canadian Permanent Residence?

As a permanent resident of Canada, you have the same benefits and privileges as a citizen, except for restrictions on the right to vote, running a political party, and a job in some relevant departments of defense. The main right you get as a Canadian PR holder is the right to live, work and study in any part of Canada. This means, according to the Permanent Residence Guidelines, once you get a PR, you are free to live in any part of Canada.

What if you received a PR through provincial nomination?

Well, as you read above, Canadian PR does not restrict you to live in only one particular province and gives you the right to live in any province or territory of Canada. Therefore, legally you are free to reside in any part of Canada as a PR, however, saying that, when you apply for a Provincial Nominee Program (PNP), it is accepted It is said that you are enrolled in the province. Canada also contributes to PR and its development.

In fact, some provinces, such as Manitoba, have also openly mentioned it in their PNP guidelines. There is no open rule, however, that the PNP applicant is expected to reside in the same province that is enrolling him, for at least 2 years. Going directly to another province of Canada after obtaining a PR through a provincial nomination is considered unspecified and can leave a wrong impression on an employer when you apply for a job in a new province.

Provide valid reasons for migration to another province

However, if you have a valid reason, that is, you are not able to get a valid job in the same province, then you are asked about the same right to migrate to another province giving valid reasons for the same reason. Is right.

Get complete help and support from a certified Canada migration specialist to thoroughly understand the PNP process, and to implement Canadian PR through a PNP or Express entry system.

World Overseas Immigration Consultancy is one of the best Canadian immigration visa advisors in Delhi and India, and we provide immigration services for Canada and Australia PR visas. You can contact us on our website. We know that it has become difficult today to apply a permanent resident visa, but world overseas immigration helps you at every stage of the immigration process in Canada and Australia. World Foreign Immigration Consultant provides all post landing services to PR holders. Being a top immigration consultant in Delhi, we promise every applicant everything written on the legal agreement. Along with this, we provide 100% job support to our candidate as soon as they get a visa.