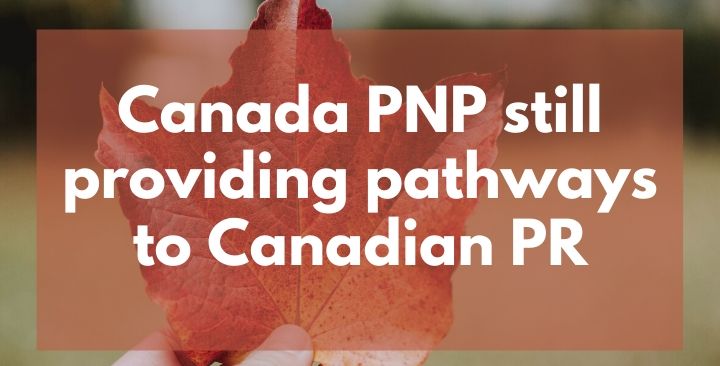 Many Province of Canada are continuing their operations to bring immigration candidates closer to the highly sought-after permanent residence status.

Provincial nominee programs (PNPs) offer more options to immigrate to Canada for foreign nationals who have worked or studied in the province, and in some cases, for those who have not.

In past few weeks, the Ontario Immigrant Nominee Program (OINP) has held three draws. Entrepreneurs, French-speakers, and tradespeople in certain occupations were targeted in these draws that all occurred in late April.

So far in 2020, Ontario has issued Notifications of Interest (NOIs) otherwise known as “invitations” to:

The province also released its PNP results from 2019, revealing that most nominations went to candidates who had profiles in the federal Express Entry system. They also nominated more principal applicants than they were allotted by the federal government last year. In the end, 7,391 principal applicants, brought 6,340 spouses and dependents for a total of 13,731 new immigrants to Ontario in 2019.

The federal government’s 2020 PNP allocation numbers for Ontario have not yet been released.

The Alberta Express Entry Stream, which is managed by the AINP, has held draws inviting federal Express Entry candidates with Comprehensive Ranking System (CRS) scores as low as 300 to apply for a provincial nomination.

If invited candidates receive the nomination, they will get an additional 600 CRS points toward their overall score, which would effectively guarantee them an Invitation to Apply (ITA) in a subsequent federal Express Entry draw.

The AINP has also put in place its own special coronavirus measures, which give some more flexibility for candidates to submit their applications. Though the AINP is still holding draws, they will only consider candidates who are currently living and working in Alberta for a provincial nomination at this time.

The Saskatchewan Immigrant Nominee Program (SINP) held five draws so far this year, inviting candidates from the Express Entry and Occupation In-Demand streams. Candidates in these categories must submit an Expression of Interest in order to be eligible.

The draw held after the onset of coronavirus travel restrictions targeted Occupation In-Demand candidates only, inviting 205 people from 71 occupations to apply for a nomination.

As part of special coronavirus measures, SINP nominees can now request an extension of six months to apply for permanent residency with the federal government.

The British Columbia Provincial Nominee Program (BC PNP) continues to hold draws regularly, inviting candidates with job offers in the province and especially those working in the tech sector.

Some weeks, candidates selected through the Tech Pilot are also invited in regular Skills Immigration and BC Express Entry invitation rounds. In the March 30, and April 16 draws certain occupations were left out of the draw in response to COVID-19-related measures in the province.

The Manitoba Provincial Nominee Program (MPNP) has held three draws since travel restrictions went into place on March 18, and nine draws since the year began.

The MPNP has issued 1,808 Letters of Advice to Apply (LAAs) to immigration candidates in these categories so far this year.

The Nova Scotia Provincial Nominee Program (NSPNP) held its first draw of the year on April 27. French-speaking Express Entry candidates were invited to apply for a provincial nomination in this invitation round.

These Express Entry candidates needed a Canadian Language Benchmark (CLB) of 8 in all French language abilities such as speaking, reading, writing, and listening. They also needed CLB of at least 6 in all English language abilities.