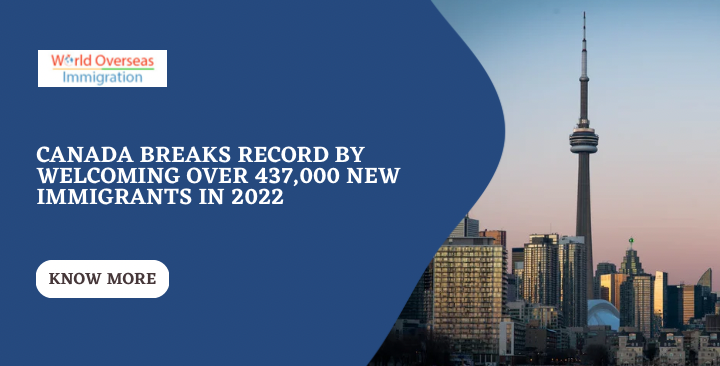 Today, Immigration Refugees and Citizenship Canada (IRCC) announced that Canada has reached a record-breaking target for admissions of permanent residents in 2022.

“Today marks an important milestone for Canada, setting a new record for newcomers welcomed in a single year.” Immigration Minister Sean Fraser said. “It is a testament to the strength and resilience of our country and its people. Newcomers play an essential role in bridging labor shortages, bringing fresh perspectives and talents to our communities, and enriching our societies as a whole. I’m excited to see what the future holds and look forward to another historic year in 2023 as we continue to welcome newcomers.

IRCC processes 5.2 million applications in 2022 across all lines of business. This includes applications for permanent residency, temporary residency and citizenship and is more than double the number of applications processed in 2021.

IRCC credits bringing more processes online for the higher number of admissions, along with new resources, new technology, streamlined processing, and increased applications processed. The government committed $50 million to IRCC for 2022-2023 in the Fall Economic Statement to address the ongoing backlog of applications, which stands at 1.09 million applications across all lines of business as of November 30, 2022.

The development of Canada’s labor force is almost 100% dependent on immigration. There are about one million job vacancies in Canada and there is a shortage of skilled workers due to an aging workforce. Immigrants are important to Canada’s economy as nine million Canadians are expected to reach the retirement age of 65 by 2030. 1 by 2035.

Additionally, approximately 75% of Canada’s population growth depends on immigration as Canada has one of the lowest global birth rates at 1.4 children per woman.

To boost the population, Canada has been trying to welcome a greater number of immigrants in recent years. According to the 2021 Census on Immigration, 1.3 million new permanent residents arrived in Canada between 2016 and 2021. Put another way, one out of every four respondents was or has been a land-immigrant or permanent resident in Canada, the highest proportion since Confederation and the largest proportion among G7 countries. It is expected that by 2036, immigrants will account for 36% of Canada’s population.