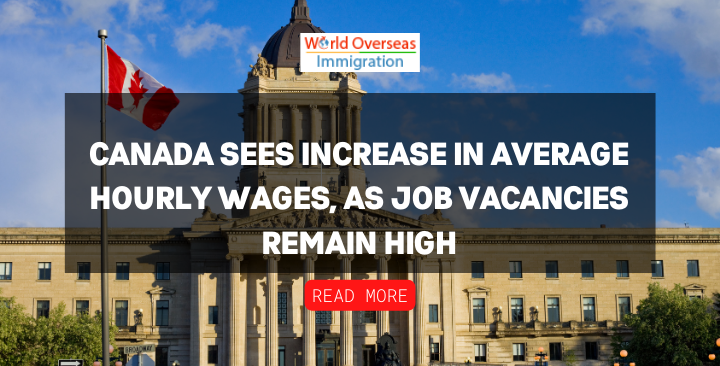 Statistics Canada’s job vacancy report for the third quarter (Q3) of 2022 reflects the trend seen throughout the year. Canada is facing a labor shortage as employers seek to fill one million (959,600) job vacancies.

A job is defined as vacant if:

Although down 3.3% from the record-high number of vacancies (993,200) seen at the beginning of the year, the need for labor remains high. In the third quarter of 2022, the vacancy per job in Canada was 1.1 persons.

Faced with a tight labor market, and increased difficulty in recruiting, many employers have tried to increase the wages of those offering vacant positions.

Average hourly wages offered increased 7.5% to $24.20 an hour compared to the same quarter a year earlier.

Some in-demand occupation categories experienced increases in salaries offered even higher than the national average, including:

In addition, the average hourly wage for all workers increased by 5.3% during the same period.

Which sectors have the highest job vacancies in Canada?

Most notably, job vacancies in Canada’s healthcare and social assistance sectors have reached a new record high. More than 150,100 positions were not filled in the third quarter of 2022.

The demand for more healthcare workers has been persistent since the start of the COVID-19 pandemic; Immigration Refugees and Citizenship Canada (IRCC) has responded by removing barriers to permanent residency for physicians and investing millions in streamlining the accreditation of foreign-educated health professionals – as Canada seeks to address this historic labor shortage Is.

Other industries that saw a notable number of vacancies include:

Which province has the most jobs?

Although job vacancies remain high across Canada, some provinces saw a greater increase in the number of open positions in the third quarter than others.

Both Manitoba and Saskatchewan saw job vacancies increase in the third quarter of 10.7% and 7.5%, respectively. A substantial percentage increase from quarter to quarter, again indicating the need for labor.

In addition, Quebec, Ontario, and British Columbia all saw a decrease in the number of job vacancies compared to the second quarter of 2022. Despite this decrease, job vacancies remain high across Canada:

British Columbia and Quebec also continued to have the highest job vacancy rates (the ratio of vacant positions to total labor demand (vacant and occupied positions)) at 6.2% and 5.8%, respectively.

As Canada looks to address the labor shortage, immigration has become a major concern for the government. In 2023, the Express Entry system of programs is likely to see changes to a targeted draw for in-demand occupations in Canada.

In light of these changes, statistics such as job vacancies within a sector can provide some insight into which occupations IRCC is likely to target for ITAs in 2023.

Additionally, Canada is already taking measures to maximize its workforce within the country, providing Open Work Permits (OPWs) to families of LMIA-based work permit holders, and international students until December 31, 2023. Can reduce the number of working hours.

Apart from the above data, these policy changes are indicating a favorable recruitment environment in 2023.