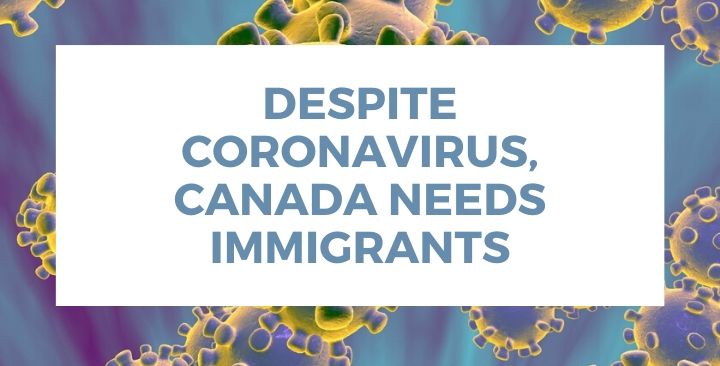 Canada has announced its 2020-2022 Immigration Levels Plan as the Coronavirus (COVID-19) crisis was escalating.

Announcement shows that Canada has no effect of corona virus on its immigration program.

Canada, just like most countries, appears headed towards a recession. COVID-19 has led to a price war between major oil producers globally, and the collapsing price of oil will have negative ramifications for Canada’s economy.

Moreover, weakened economic activity will hurt nearly every sector with certain ones in particular such as tourism and hospitality bearing significant blows.

The Bank of Canada announced an emergency cut to its overnight interest rate, just one week after it had already cut the rate. They may not be done, as some analysts forecast more cuts may be needed to help Canada’s economy weather the storm.

it is understandable that Canada’s decision to welcome over one million additional immigrants over the next three years is not the focus of attention at the moment.

COVID-19 crisis can help us understand why immigration will be so crucial to Canada’s economy moving forward.

Canada’s economy looks set to contract in 2020. As such, one could make the argument that increasing immigration at this moment is not ideal since newcomers will be arriving in Canada at a time when the labour market will struggle to absorb them.

However, current events serve as a reminder that Canada’s immigration policies are largely proactive in nature, and since the late 1980s, the decision of the number of immigrants to welcome has been largely detached from economic conditions on the ground.

While Canada welcomes immigrants to help fill immediate job vacancies, its immigration policies are also meant to strengthen the country’s economic standing years and decades from now. This means that even if newcomers arrive during an economic downturn, Canada expects the same newcomers to be catalysts for economic growth in the future.

A major reason for this is that all of Canada’s nine million baby boomers will reach retirement age by the end of this decade. Since Canada has a low birth rate, it is relying on immigration to drive the majority of its labour force growth.

Labour force growth is one of two ways to grow the economy, with the other way being to use the labour force more productively.

Hence, it still makes sense to admit high levels of newcomers even during periods of economic distress. While immigrants arriving in Canada in 2020 may face more difficulties than usual in finding work that aligns with their skills, education, and work experience, they will soon face the prospects of working in a country where the supply of labour will be significantly constrained as more baby boomers leave the workforce. This means that such immigrants will likely see more employers competing for their services, which would result in much better employment outcomes and salaries.

If you want to apply for Canada permanent residency under Federal skilled worker program which was launched in January 2015 by Canadian Government to invite skilled workers from all over the world in their Country. Applicant need to qualify 67 points out of 100 which are based on the factors defined below:

[1.] Age: Under the Canada Express Entry  visa Programme the highest points are awarded to the applicants between the age group of 18 to 35 years. Applicants above the age group of 35 years are given lesser points and maximum age limit to qualify under Canada express entry program is 45 years and the applicants above 45 years of age still have the options for Province nomination programs.

[2.] Education Eligibility: To be considered for Canada Express Entry visa, you need to have a Canadian or Canadian higher secondary education equivalent certification i.e. a diploma or a bachelor’s  or master’s degree in any field.

[3.] Skilled Work Experience: To apply for Express Entry visa applicant should hold a minimum of 1 year of consistent work at a full-time capacity for a salary in the past 10 years in the skills O, A or B category in the National Occupational Classification (NOC) system list.

[4] Language Ability Test: Applicant must score at least 6 bands in every English Literacy Test module to be eligible for immigration to Canada  under the Express Entry visa. Also, IELTS score needs to be less than 2 years old at the time of application. Extra points are given to those who know the French  language, so having extra knowledge of the French language is an added advantage.

[5.] Adaptability: For Express Entry visa, If you have a spouse or common-law partner who will also immigrate to Canada with you. Applicant will be given extra 10 points for the adaptability too.

[6.] Arranged Employment: If you are migrating to Canada with a job offer by a Canadian employer you get extra 10 points in your profile but need to be sure that your occupation is listed in the NOC skill code type A, O or B.