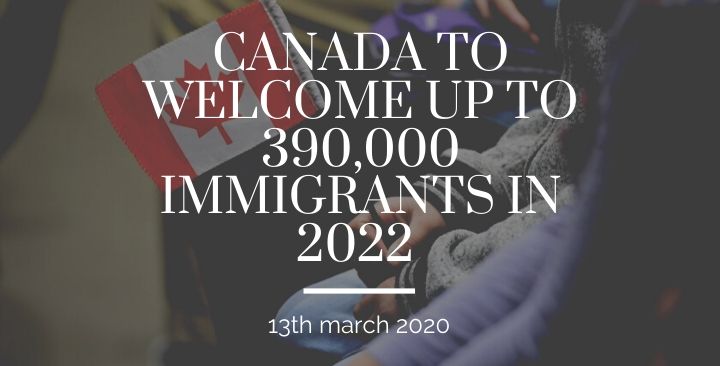 Canada is planning to welcome more than one million new permanent residents in the next three years.

This was revealed today in the federal government’s 2020-2022 Immigration Levels Plan.

Canada continues its approach to gradually increase immigration levels. This is likely to give stakeholders time to adequately plan to support a larger population.

The most significant revelation from the announcement is Canada’s target for 2022 since today is the first time such information has become publicly available.

In 2017, Canada reintroduced multi-year levels plans after the first attempt between 1982-1984 was disrupted by a recession.

Canada will continue to admit the balance of its newcomers under the economic class, with 58 per cent set to arrive through the likes of Express Entry programs, the Provincial Nominee Program, Quebec’s programs, and other federal streams such as the Atlantic Immigration Pilot (AIP). Most of the growth will come from the economic class, as its target is going to rise by nearly 10,000 immigrants each year.

Compared with 2019, the government is increasing its PNP admission target by 20 per cent in 2022. Canada is also slated to welcome more immigrants under various pilots. It is aiming to welcome 5,200 under pilots such as the Agri-Food Immigration Pilot and the Rural and Northern Immigration Pilot. It may end up nearly doubling its intake under these pilots by 2022.

Although the AIP is set to become a permanent program, the federal government is keeping its AIP targets stable at 5,000 during the plan.

Quebec’s levels are yet to be determined for 2021 and 2022, as the federal government waits to consult with Quebec in light of the major reforms the province is currently undertaking to its immigration system.

In addition, 26 per cent will be welcomed under the family class, while the remaining 16 per cent will be admitted on humanitarian and compassionate grounds. There will be no growth under the family class. The government has set the same target for family class immigration of 91,000 newcomers over the coming three years. There will be minimal growth for those admitted for humanitarian and compassionate purposes.

Canada’s current immigration levels are high by historical standards. The country has welcomed 300,000 immigrants or more just five times since its founding back in 1867. On a per-capita basis, Canada’s levels are also high, as it is now welcoming 0.9 per cent of its population in immigrants. By way of comparison, the United States has welcomed an average of one million immigrants annually in recent times. However, that figure represents just 0.3 per cent of its population.

Today’s announcement is part of a broader trend that will likely see Canada continue to boost immigration and eventually break the 400,000-newcomer threshold. The country is poised to welcome some 3.5 million immigrants this decade, compared with 2.8 million between 2010-2019.

All told, however, demographic and economic circumstances are just one of the six factors that will shape the future of Canada’s immigration levels.

By November, the Canadian government will table its next immigration levels plan, which may contain its target for 2023.