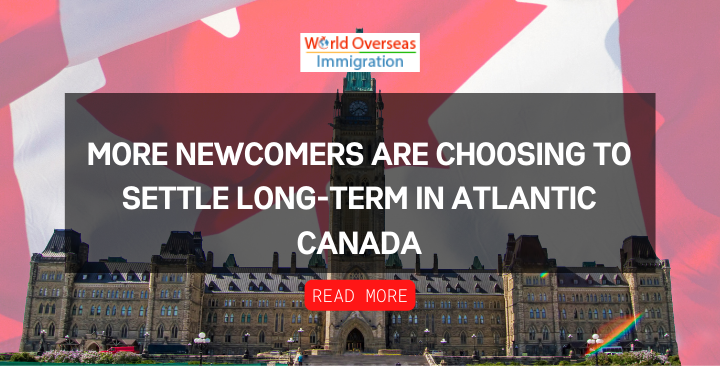 A recent study by Statistics Canada suggests that the high immigrant retention rates in Atlantic Canada can be attributed to the success of the Atlantic Immigration Program (AIP).

Under AIP, launched in 2017 as a pilot programme, governments, employers, communities and settlement agencies work together to recruit skilled workers and international graduates. Working with settlement service providers, immigrants receive more support in settling and integrating than if they came to Canada through a separate immigration program.

The study, conducted by Immigration, Refugees and Citizenship Canada (IRCC), concluded that the AIP was more successful in retaining immigrants than the Provincial Nominated Program (PNP) one year after admission. The data showed that within the first three years of AIP, the retention rates of immigrants increased significantly in the Atlantic provinces. This is in contrast to other provinces where retention rates have declined.

The largest increase in retention under AIP occurred in Nova Scotia. The one-year retention rate for skilled workers and skilled tradespeople recruited under the program in 2019 was 67.6%. This is more than three times the rate of 21.5% in 2016.

New Brunswick, Newfoundland and Labrador also had high retention rates under the program. Over four years, the rate of immigrants remaining in those provinces increased by 22%. Prince Edward Island had the lowest retention rate in the country but the largest increase in admissions between 2010–2015.

Why does AIP exist?

This has led to a shrinking workforce that puts a strain on the economy and makes it more difficult for provinces to provide services such as healthcare. The AIP was established to address some of the difficulties for newcomers to settling in Canada. This ensures easy and fast integration and a high rate of retention.

The success of AIP led to the establishment of other pilot programs such as the Rural and Northern Immigration Pilot Program, along with making the program permanent in 2022.

Declining Retention Rates in the Prairies

The study also found that between 2010 and 2015, people who arrived in Ontario, British Columbia or Alberta were most likely to live in those provinces for five years after their arrival.

Manitoba and Saskatchewan also experienced a decline of more than 10% in retention rates between 2010–2015.

The immigration category under which an immigrant arrives in Canada also affects where they settle long-term. For example, those who come to a province through an economic immigration program are less likely to stay in the province of entry. There was an average decline of 4.3% in provincial retention of economic immigrants between 2010–2015. The largest decrease was in Saskatchewan, which fell from 79.3% to 61.7%.

In 2015 the retention rate for those under family category sponsorship was 92.3% and that of refugees was 87.4%

How does AIP work?

AIP is an employer-driven program that facilitates the hiring of foreign nationals.

Unlike provincial nominated programs, applicants under this program must have a job offer from a nominated employer and an individual settlement plan for themselves and their families.

Designated employers are not required to obtain a Labor Market Impact Assessment (LMIA). However, once an applicant accepts a job offer, the employer should match them with a designated settlement service provider and assist in their integration long term.

Who is eligible for AIP?

For AIP, candidates must have 1,560 hours of work experience in the last five years. There is an education requirement which may vary depending on your National Occupational Code (NOC) TEER.

Language requirements also vary depending on the NOC tier category of your job offer.

Those applying as international students must Have a degree, diploma, certificate, or trade or apprenticeship certification that takes at least 2 years of study and is from an accredited post-secondary institution in New Brunswick, Nova Scotia, Prince Edward Island, or Newfoundland and Labrador. Additionally, they must already be in Canada on a study permit and must have lived in one of the Atlantic provinces for at least 16 months during the last two years prior to graduation.