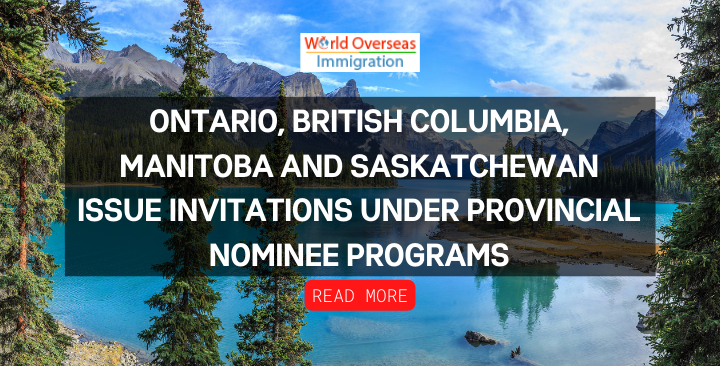 British Columbia, Ontario and Saskatchewan this week issued invitations for candidates to apply through their Provincial Nomination Program (PNP).

On December 13, the Ontario Immigrant Nominee Program (OINP) issued 160 letters of interest to candidates for the Express Entry French-Speaking Skilled Worker stream. Candidates already had to be in the Express Entry pool with Comprehensive Ranking System (CRS) score between 341-490. Draw targeted to candidates with work experience in specific National Occupational Classification Code.

To be eligible for this stream, candidates must be in the pool for the Federal Skilled Worker Program or the Canadian Experience Class. They must be able to understand, read, write and speak French at Canadian Language Benchmark (CLB) level 7 or higher.

Additionally, they must be able to understand, read, write and speak English at CLB level 6 or higher.

On December 13, more than 212 candidates were invited to apply for provincial nominations in British Columbia.

The province invited 180 candidates in a general draw consisting of technical occupations. Invitations were issued to candidates in the Skilled Worker and International Graduate categories and this included Express Entry candidates.

Invitations were also issued to entry level and semi-skilled candidates. The SIRS score for a normal draw ranged between 80- 104.

SIRS works much like the Express Entry Comprehensive Ranking System (CRS), but is only used for PNPs in British Columbia.

Saskatchewan held its first draw in over a month on 15 December. The province invited 348 candidates under the Express Entry stream, and 285 under the Saskatchewan Immigrant Nominee Program (SINP) occupation-in-demand stream, for a total of 633 invitations issued. Candidates of both the categories need a score of 82.

Two invitations were also issued to candidates with a score of 62 whose country of residence is Ukraine.

Manitoba invited 1,030 candidates under the Skilled Workers Overseas stream of the Manitoba Provincial Enrollment Program. To be invited, candidates must meet a baseline of criteria specific to their program. Out of the total number of candidates who received Expression of Interest (EOI), 656 had profiles in the Express Entry system.