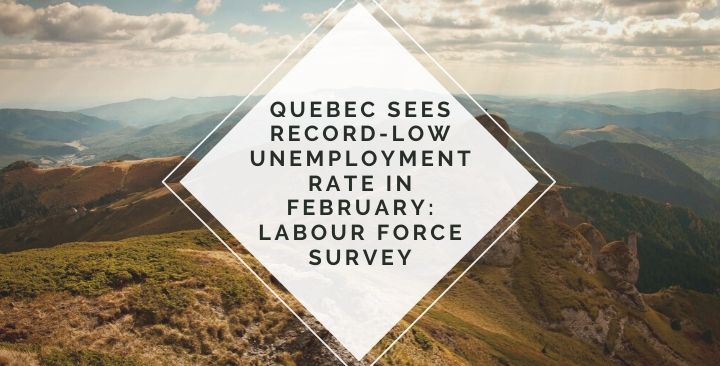 Employment has been increased in Quebec, Alberta, Nova Scotia and Manitoba

Quebec employment rates have been on an upswing over the past three months, and in February, about 66,000 people got jobs in the province.

As a result of these gains, Quebec saw a historically low unemployment rate of 4.5 per cent last month. This is the lowest since comparable Statistics Canada data became available in 1976.

Most of the jobs went to youth aged 15 to 24. The unemployment rate for this age group declined to 6.8 per cent, which is also the lowest rate since 1976.

The unemployment rate is the number of unemployed people as a percentage of the labour force, both employed and unemployed.

What does the low unemployment rate mean for immigrants?

Low unemployment rates are good for job seekers because it means that there are more jobs available to choose from. Employers are under pressure to attract and retain talent. This is why periods of low unemployment can be considered a “job-seekers market.”

In the next 10 years, as over nine million baby boomers retire from their jobs, Canada is going to see more and more labour shortages. With not enough young people entering the workforce, Canada is turning to immigration to help support labour market needs.

In his first major speech as Canada’s immigration minister last week, Marco Mendicino estimated that about 80 per cent of Canada’s population growth will come from immigration, and may reach 100 per cent by the 2030s. The majority of these are expected to be economic-class immigrants, in other words, foreigners moving to Canada for work.

Employment in other Canadian provinces

Employment increases were also seen in Alberta, Nova Scotia and Manitoba. The rest of the country was little changed.

Though the unemployment rate in Manitoba was virtually unchanged at five per cent, about 3,200 more people were employed in February. Manitoba has been seeing an employment uptrend since December. Since last year employment has gone up 1.5 per cent in this Canadian Prairie Province.

Newfoundland and Labrador was relatively unchanged between January and February. Both employment and unemployment went up slightly. The unemployment rate is now 12 per cent.

Unemployment in Saskatchewan went up slightly to 6.2 percent, however, the employment rate remained the same.