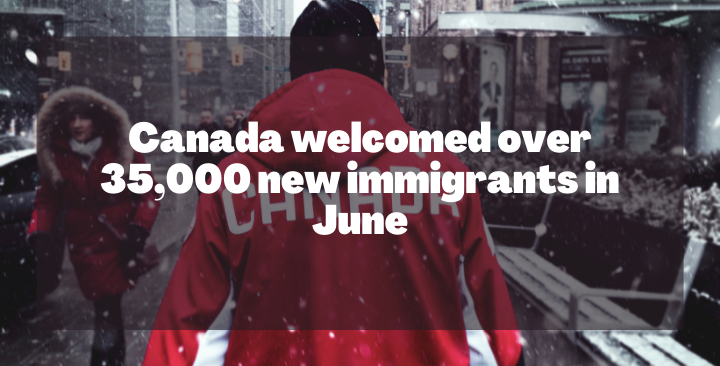 As Canadian Government has announced to welcome over 401000 immigrants in 2021. It means 43000 immigrants per month. Accordingly, Canada has welcomed over 35000 immigrants in the month of June. This figure is significantly higher than Canada’s totals in recent months. Canada got off to a strong start to the year. It welcomed 24,680 new immigrants in January but lost momentum in the months to follow. The country then welcomed 23,395 in February, 22,425 in March, and 21,155 in April, and 17,100 in May. Altogether Canada has welcomed some 143,000 new permanent residents through the first six months of 2021 which remains well short of the pace it needs to welcome 401,000 newcomers by the end of this year. In order to achieve this newcomer target, Canada needs to land another 258,000 immigrants — an average of 43,000 per month — over the rest of the year. Welcoming this volume of immigration over the remaining six months will be difficult but there is an outside chance it can be achieved. Prior to the pandemic Canada welcomed an average of 25,000 to 35,000 newcomers per month.

In 2019, levels were stronger in the second half of the year compared to the first as Canada welcomed 180,000 newcomers between July and December. IRCC also introduced six new permanent residency streams that will enable some 90,000 international student graduates and essential workers to remain in Canada. The department’s goal is to process some 40,000 of these applications by the end of this year.

Canada has been working toward achieving the 2021 target is by inviting huge number of immigration candidates to apply for permanent residence, who are living in Canada during a pandemic. About every two weeks since the start of the year, Canada immigration has held Express Entry draws that only target candidates who are eligible for the Canadian Experience Class (CEC), or who have previously been nominated through a Provincial Nominee Program (PNP). Apart from this Candidate can apply through start-up visa and LMIA owner operator work permit as well.  Express Entry is the main way Canada welcomes economic class immigrants as it comprises over one-quarter of Canada’s annual newcomer admissions. On February 13, Canada invited every CEC-eligible candidate from the Express Entry pool, a total of 27,332 candidates. This was by far the largest and most historic draw after Express Entry launched in January 2015.